In celebration of the cathedral centenary a peal of bells was installed in September 2001.  The first official ringing took place on 30 September 2001.

The peal is a 5-bell “Salve Regina” swinging peal in the European style, and it is the heaviest and deepest-toned of its kind in Australia.  It is very well suited to the grand presence of the cathedral itself, with the great tower and spire – truly a harmony of architecture and bells! 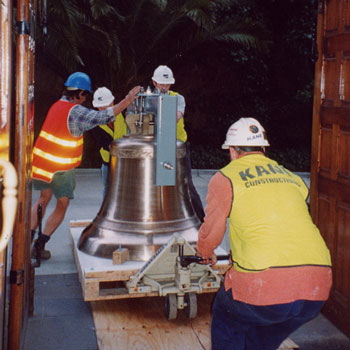 The spacious belfry, visited by Hervey Bagot with the cathedral architect in Decem-ber 2000, proved to be an inspiration.  The cathedral authorities had requested a pro-posal for a swinging peal of bells, not to be the same as a change-ringing peal.  The belfry dimensions, about 9 metres cubed, made it easy to suggest a European swing-ing peal which in a good tower can develop excellent musical effects.  The concept was then elaborated for this tower by Hervey Bagot, the eventual supplier and instal-ler of the bell peal.

A “European peal” is a peal of cast bronze bells of a type whose historical origins can be found in 13th century Europe.  The bells swing back and forth, each at its own rate, and the motifs, or note selections, often in pentatonic scale, follow traditional chants.  Hence Salve Regina, which here in Bendigo is rendered with the notes
E – G# -- B – c# -- e
The lowest four notes provide the motif, and the fifth bell, e, mirrors, one octave higher, the basis bell E and rounds out the musical impression.  The peal is  describ-ed technically as an harmonic-melodic peal, whose function is to create a “sea of sound” with an interplay of melody and harmony, dissonance and resolution ever changing.  The details of the bells are as follows: 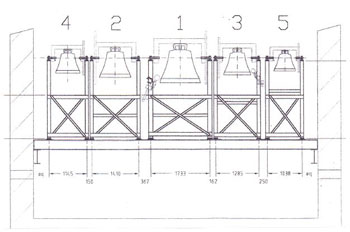 The sizes and notes of the bells here were ultimately determined by the dimensions of the belfry and of its sound openings (through which the bells were to be inserted).  These were measured and discussed during planning meetings prior to ordering of the peal.  As completed, the bells in their frames are mounted in one line across the belfry, parallel to the cathedral nave, with the smallest bells at the ends.  The small-est bell, no. 5, is at the Bendigo city end.

After discussions held in early 2001 the bells were finally ordered in March, leaving only a short time, in which much remained to be done.  Completion date September 2001 was non-negotiable!

The French bellfoundry Paccard Fonderie de Cloches et Carillons, near Annecy (established 1796), was selected by Hervey Bagot to supply the bells themselves, with all the supporting frames, fittings, and accessories to be specified by him for design and construction in Australia.

The tuning of the bells was studied carefully.  Every such bell has many harmonics, the most important six of which have a well-defined relationship such as in the musical diagram, which is for a “middle C” bell.

In a peal it is essential that the many tones thus present do correctly overlap and interact with each other.  It was to make observations and check the tones of each freshly tuned bell (as a procurer of bells is entitled to do) that Hervey Bagot flew to France for a few days near the end of May 2001, the projected date of readiness.  There he found that bells 1, 2, and 3 had been finished, bell 4 was on the tuning machine, and bell 5 stood on the foundry floor next to the tuning machine.  He had taken with him a portable bell-tone tester.  The tunings were discussed with the bell tuner, and some small adjustments made on the spot.  During this time the inscrip-tions on the bells were checked for correctness.

Another purpose of Hervey's journey to Annecy was to make detailed physical measurements on the bells as cast and finished.  Normally this would have awaited the arrival of the bells in Adelaide, but was necessary now so that, while the bells were making the sea journey to Australia, construction of all the supporting frames and fittings could go ahead in Adelaide without delay.  The bells were shipped from Annecy on 1 June 2001 and arrived in Adelaide at the end of July.

Attention now became concentrated on another important aspect of the peal, namely preparation of the belfry to receive the bells and frames.  As in any such installation, the tower and a method of supporting the swinging peal became the subject of careful engineering study from the standpoint of the vibratory forces that would have to be controlled.  A modern, computer-aided study in Melbourne led to the design of stout steel bearer beams in a bridge form spanning the belfry and seated on four corner points.

September arrived, and in Adelaide the paint was dry on the new steel frames with one day to spare!  Bells and parts were loaded on to a dedicated truck and trailer, for the journey to Bendigo on Thursday 13 September.  Upon arrival the bells were transferred into the cathedral for display until after their blessing on Sunday 16 September.  The frames were stacked in the builder's yard.

Installation followed during the next two weeks, and all was in readiness for the centenary day Sunday 30 September.

The Salve Regina peal can be used either as the Plenum (full peal) or as smaller peal selections.  The bells are swung electrically, one motor per bell, and the operations are switched from a modern microprocessor (computer) controller mounted at ground level in the cathedral.  The largest bell additionally has an electromagnetic chiming hammer for certain other purposes.  The controller was supplied with the bells, and it contains a “menu” of peals and other functions, as below, which can be selected by the user.  In the peals the bells are introduced one at a time, at intervals of 15 seconds, for effect.  Each bell is engineered to swing, and strike, at a progres-sively different rate from its companions, so that the pattern of sound changes continually during a peal.  No. 1 bell is the slowest, no. 5 the fastest.  The duration of each peal in minutes has been set at the same as the number of bells in the peal.  With the exception of the first item, all peals start with the highest note in that peal. 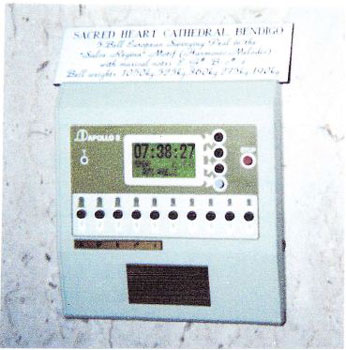 Attributions: With the exception of the digital colour photographs marked jpg, all illustrations are the copyright property of Hervey Bagot.