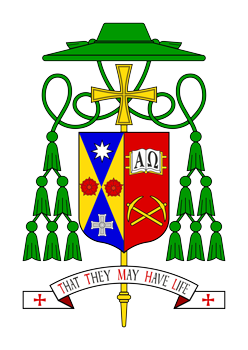 In the language of heraldry, Bishop Shane’s personal arms are:

or, in plain English:

His motto is taken from John 10:10
I have come so that they may have life and have it to the full.

The crossed pickaxes are the tools of goldmining, which was integral to the founding of both Ballarat and Bendigo. The bible comes from the arms of Catholic Theological College and reflects its motto, Tolle lege, the admonition that prompted St Augustine to take up and read the bible, which led to his baptism.

As is traditional for the coat of arms of a bishop, the arms are placed before an episcopal cross and are ensigned with a green galero (Roman hat) with six fiocchi (tassels) on each side.

Bishop Shane’s personal arms will be combined with those of the Diocese of Sandhurst by impalement, a traditional way of denoting a bishop’s union with his diocese.

In the language of heraldry, the diocesan arms are:

The gold of the field represents the goldfields, which are located within the diocese. The blue and the roses represent the Virgin Mary, Mother of God, who, under the title Our Lady of Good Counsel, is Patroness of the Diocese. The Paderborn Cross at the base is an ancient Christian symbol discovered in an eighth-century grave beneath the Cathedral at Paderborn, Germany, which was the home city of Dr Henry Backhaus, the pioneer priest of the Bendigo Goldfields.

The diocesan arms and Bishop Shane’s personal arms were designed by Richard d’Apice AM KCSG and Fr. Guy Selvester and illustrated by Sandy Turnbull.