The Catholic Diocese of Sandhurst has been awarded a $5,515.00 federal Community Heritage Grant to fund the Digitisation of Historical Parish Sacramental Registers.

The grant was announced at the National Library of Australia in Canberra on 25 October, 2016.

This year, grants worth $415,075 have been distributed to 77 community groups and organisations from around Australia to assist in the identification and preservation of community owned but nationally significant heritage collections. 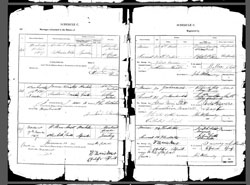 collections management issue throughout the diocese. “Requests for information from Sacramental registers are very common throughout the diocese and some of the parish registers cannot be accessed due to their age and fragility. This project will see those early historical parish registers professionally copied to microform so that a stable master set is created and kept permanently in the diocesan archive. The data on the master microform will be watermarked and converted to pdf, providing a working set for parishes as well as the diocesan archive. The working set will aid transcription projects and provide easier access to the records, enabling requests from the public (within the scope of privacy legislation) to be undertaken. Most importantly, the original registers, many of which are still manually handled, will be permanently preserved.  After digitisation, all of the original registers will be stored safely and securely ensuring their long term preservation.”

Director-General of the National Library of Australia, Ms Anne-Marie Schwirtlich, said the CHG program showed the commitment by the National Library, along with its partner institutions and the Federal Government, in encouraging communities to care for the nation’s heritage, be it in small country towns or capital cities.