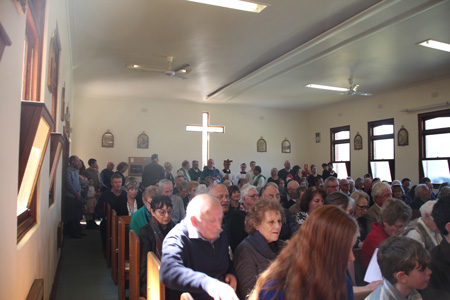 On Sunday, August 26, around 250 people – parishioners present and past, and guests – celebrated the final Mass and a moving decommissioning ceremony for St Joseph’s Church Undera.

In his homily, Monsignor Peter recalled that in the late 19th century it was mainly Irish Catholics who had moved into the area from Kilmore and the goldfields around Clunes. Family bibles were kept in slab huts, Masses were held in barns, homes or boundary riders’ huts and the priests travelled big distances on horseback.

“It was 1879 when the first Church was built on a triangular block of land, east of Undera. The framework and the exterior were all in red gum. The floor boards were of murray pine. It was all for the cost of 200 pounds! The difficulty was that as the red gum boards dried out they buckled. So, the parishioners had an air-conditioned Church and it was at no extra cost! Subsequently one of the ladies recalled that the altar rails were always leaning to the west.”

“The prospect of a new church led to many fund raising functions. Apart from the practical side of raising 11,000 pounds, these were consolidating social events. Bonds were built between families. A decision to build a new Church was confirmed. Fr Doherty purchased three blocks of land in Anderson Street it was Bishop Stewart who blessed and opened the new Church on May 18, 1958.”

After Mass, it was time for the decommissioning ceremony. The assembly joined in final prayers led from the front of the Nave, at the Lecturn, and at the Altar. Everyone present came forward to make a final gesture of reverence before the altar before representatives of local families received the sacred objects: Monsignor Peter handed the Lectionary to the Delahenty family and the sacred vessels to Des Sleeth and Marie Dillon.

Inez Raleigh and Anne Weire folded and removed the altar cloths. Fr Michael Morley, parish priest of Sacred Heart Tatura, received the Altar Stone.The congregation renewed their Baptismal Promises before processing out and gathering outside the front doors of the Church. The doors were sprinkled with holy water before the final prayers and closure. Following these beautiful final liturgies, a hearty afternoon tea was served, and many more stories remembered, at the Undera Hotel.