As a student at St Joseph’s College, Ferntree Gully, Michael witnessed the ethos of the school being put into practice and found himself in good stead to live out those values as a teacher. The Salesian Priests and Brothers who ran the school were founded by Italian Saint John Bosco who originally set up a school in Turin which provided job skills and education opportunities for marginalised youth.

St John Bosco was an inspiration for Michael. St John Bosco wrote specifically on ways to relate to and help young people. His counter-cultural philosophies focused on a preventative system, rather than a repressive one. A common phrase he used with his brothers and priests was ‘meet them at the water pump’ ─ meaning to meet young people on their terms. Education is very relational and for St John Bosco that relationship started in informal settings and was built on in the formal setting of the classroom. This motto of building relationships and showing compassion is a trait Michael has continued to carry throughout his career.

After 17 years at St Joseph's in Ferntree Gully, Michael took up a position as Deputy Principal, and later Principal at Mary MacKillop Catholic Regional College in Leongatha. While at this school Michael joined the Association of Josephite Affiliated Secondary Schools (AJASS), an association of schools which had taken Mary MacKillop as their patron.
Michael has served on the Faith and Enrichment Committee of the Principals’ Association of Victorian Catholic Secondary Schools (PAVCSS), as well as a period representing the Diocese of Sale Catholic Secondary Principals at PAVCSS.

Michael was appointed Principal of St Joseph’s College, Echuca in 2014. The Brigidine/Kildare Ministries value of ‘wonder’ is one that resonates deeply with Michael, and he believes St Joseph’s College, Echuca truly lives up to its reputation as hope-filled, joyful and progressive; a school that looks to the future, while also celebrating its long proud history and tradition, he says.

Reflecting on his career, Michael says that it is the parallels in the three charisms of the schools in which he has served that have had the greatest impact on him.

Mary MacKillop in Leongatha: ‘The wisdom of the Lord teaches us.’

“All three have meant a lot to me at each individual school and so much of each school has followed me. And, of course, this is all underpinned by Jesus as the central character ... but we mere mortals need other role models; and that’s where your John Boscos, and your Mary MacKillops and Daniel Delanys come in to role model for us what Jesus wants us to do and how we should go about it,” Michael said.

“The work that I’ve enjoyed the most was with the challenging students, the ones who were struggling to fit in; they were the ones who got under my skin. I put that down to the Salesians but all three charisms have a history of reaching out to those in need. All have their own twist on how to witness our Catholic values, that I have tried to take carriage of at each school I’ve been at.”

Michael acknowledges his years spent as principal have meant less time with those struggling students but says the joy he once got out of developing them, he now gets in developing staff and witnessing them as they get the best out of their students.

There is no doubt he has missed the close interaction with students over recent years and, while he has tried to get out of the office and take afternoon bus duty as often as he can, COVID-19 restrictions and his illness have made this difficult.

But in true Michael fashion, he continues to look on the practical side and is grateful to the leadership team and Kildare Ministries who have let him do what he needed to do to preserve his energy and slow his disease down.

This gratitude has always played a big role in his life and has stood by him since he was diagnosed with Parkinson's Disease a month before his 60th birthday, in March 2017.

While many in Michael’s position would be forgiven for feeling angry with the world, he considers himself fortunate because his condition appears to be slow moving. Doctors are currently treating the tremors with medication, but there is nothing they can do for the tiredness, which he describes is like “walking through waist deep water”, leaving him physically and mentally exhausted at the end of each day.

'Why not me, is more often what I ask? You don't have to look far around the world to be grateful. You look at the way people live in the Gaza Strip; you look at the people in Haiti where the earthquake is ... I have lost friends to cancer and Motor Neurone Disease. I have nothing to complain about.

“My Mum and Dad are the sort of people who anytime you whinged, would say just have a look around; 'there but for the grace of God go I’.”

Michael has a broad streak of compassion, which anyone who knows him would attest to. It’s another strong value that has guided his life.

“I’ve always tried to do whatever I can to have the three schools running as smoothly as possible for all the kids. One of the things about Catholic Education that appeals to me is that we're trying to educate the whole person. You can’t be a sporting school. You can't be an overly academic school. If you get too much pastoral care, you love them into mediocrity. If you get too much academia, you are not caring enough about the kids who are struggling. It's the gospel values that underpin getting that balance as right as you possibly can,” he said.

This ties in with another teaching philosophy of Michael’s ─ he would love to find a measure for when someone is producing their best effort.

“I've often said to kids if you produce your best effort, and your best effort is a C, and you think your parents will give you grief when you take your report home, then I'll walk up the footpath with you and stick up for you. But if you're capable of getting a B when you only got a C, I'll be waiting with your parents to give you a hard time.”

While Michael argues there is no recipe that will work for everyone, he does believe the education system is getting better and what’s kept him going all these years has been the challenge of trying to do the best he can.

“The ongoing challenge has always been wanting success for as many as possible in your care ─ whatever that looks like for each individual student. Success for some kids is getting straight As, for others it's getting to school three days a week. But what has always been a big one for me is never letting the reason become an excuse. Acknowledge the reasons and work with them.”

To Michael’s delight, St Joseph’s is currently involved in a study with the University of Melbourne called New Metrics, which is exploring how to measure and report on things like resilience, compassion, or personal best. It is his dream that one day we may have the answers.

In considering whether there’s a legacy he’d like to leave behind, Michael is resolute ─ “it's never been about me; it's only been about the students."

However, he does acknowledge that because he’s had such a long time to prepare for his retirement, one thing he has focused on is building a high performing team to hand over to incoming Principal Anne Marie Cairns and to set the College up for the next exciting phase with the second campus.

“The rest has just been Mike Delaney doing Mike Delaney’s job to the best of his ability, with the gospel values underpinning it all,” he said. “I am just so grateful for every single opportunity I have had and every single person I've been lucky enough to work with ─ staff, students, families. I've been blessed.

“I’ve always felt like a round peg in a round hole. I’ve never woken up and thought, I don't want to go to work. Actually, I don’t go to work, I go to school.”

When Michael retires at the end of 2021, and moves back to South Gippsland, with his wife Shauna, he will have completed 43 years of service in Catholic education, and 23 of those years as a principal.
Only 6 other principals currently serving in Catholic secondary education in Victoria have served as principals as long, or longer than him.
This achievement, he believes, has earned him a bit of a break from people, and so, in March next year, he will set off on his very own pilgrimage. With Shauna as his road crew, he intends to walk 1000km in 30 days as a sort of Australian ‘Camino’; at this stage a ‘mud map’ that starts around Echuca and finishes at the mouth of the Murray River via Portland and Penola.

A fitting way to round out an extraordinary career of ‘meeting people at the water pump’ ─ or in other words, of building relationships with compassion and gratitude. 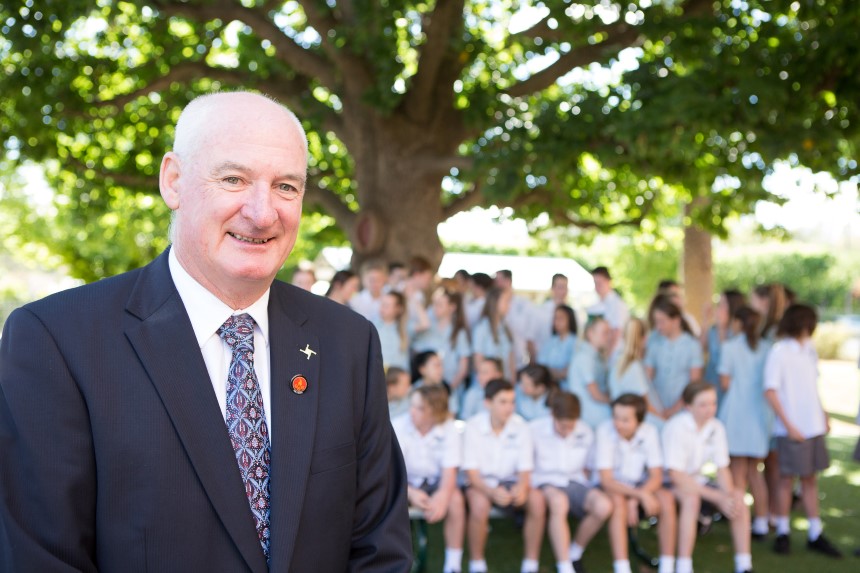