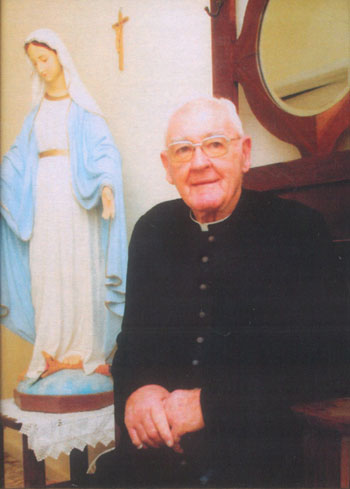 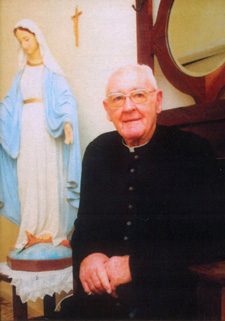 The death of someone close to us always confronts us with our own mortality, although when the person is of advanced years we may seek to distance ourselves from death with the thought that a great deal of time separates us from the reality because we are not yet at such an age. Never the less, we cannot dismiss the inevitability of our own death. The second reading of today's Mass may further disturb us with the reminder of the encounter with God our Judge, following our death.

Before we give way to distress, we have only to reflect on the Gospel passage of today's Mass to rediscover the God of love who created us and constantly call us to share in His life. Chapter six of St John's Gospel presents Jesus' teaching on the Eucharist as the centre of the disciple's life and the source of the ever deepening relationship with him. This relationship fortifies us on our pilgrimage through life and ensures our welcome into eternal life.

As a young man of nineteen, Father Bill Grogan had already responded to the prompting of the God and took the first steps in dedicating his life to God by entering the Marist's novitiate and committing his himself to religious life as a teacher. Following his Profession he served in a number of Marist schools, as a secondary teaching, in Sydney before becoming Principal at Broken Hill and then Forbes. In 1959, following the death of Brother Damian, he was appointed Provincial Superior, by the Superior General. From 1965 to 1973 he was Novice Master at Macedon. He then returned to his alma mater, at Preston for several years before seeking leave of the Marist Brothers, in 1978 to study for the Diocesan Priesthood at St Paul's National Seminary, Sydney. He was ordained to the Priesthood, at Sacred Heart Church, Preston on the 22nd June, 1979 by Archbishop Frank Little for the Diocese of Sandhurst.

As a priest of this Diocese he served in the parishes of the Cathedral, Benalla and Myrtleford as Assistant Priest, before coming here to Moyu, initially as Administrator and then Parish Priest. In all these appointments, but particularly here at Moyu, Father Bill's love of and commitment to his God in the service of his people was evident. The Gospel reading of today's Mass with its focus on the Eucharist is especially appropriate, for Father Bill saw the Eucharist as central to his ministry, offering the Mass as the spiritual food to his parishioners to assist them in their deepening relationship with their God.

As a true son of the Marists, his devotion to Mary, our Mother was always to the fore, as the one who assists us in our relationship with God.
When age and frailty prompted the move to the next stage of Father Bill's journey, he found it difficult to take the decision to retire. The compassionate care of Bishop Joe Grech, Monsignor John White, Father Peter Austin and Father Peter Ferwerda helped facilitate the move firstly to Rochester Presbytery for seven months and then to the Little Sisters of the Poor, Northcote and finally the Sisters of Nazareth, Ballarat where he died peacefully last Sunday, as the Scriptures say, "in the fullness of his years" at the age of 90 years and nine months.

In the second reading of today's Mass, St Paul in writing to the Christians of Rome, reminds them that "the life and death of each of us has it's influence on others" and that is no less true of Father Bill Grogan. We cannot estimate his influence on the young students he taught in Sydney, Broken Hill and Forbes, the influence of his leadership of the Marists Brothers as their Provincial and the formation he gave to the Marist's novices, nor can we estimate the influence on the people of the parishes in which he served as a priest, but we can be certain that his commitment to God, his openness to the Holy Spirit made it possible for God to reach through Father Bill and his dedicated service, to touch the lives of many with His love, bringing them comfort and encouragement and setting them on their way to eternal life. What more could be asked of a disciple?

We all belong to the Community of Christ and as such we give to others but we also are supported by others in a two way relationship. In this regard, I particularly acknowledge the great support in friendship and love of the parishioners of Moyu Parish in their care for their pastor, Father Bill. The love and support of his priestly brothers, especially Monsignor John White, Fathers Peter Ferwerda, Peter Austin and the chaplain at Nazareth House, Father Kevin Condon, OP. The dedication of the Little Sisterrs of the Poor at Northcote and the Sisters of Nazareth, Ballarat and their staffs were a special part of the care of Father Bill, as he approached the end of his earthly journey along with the enduring support and love of his family, for which we are deeply grateful.

May his soul and the souls of all the faithful departed rest in peace. Amen.