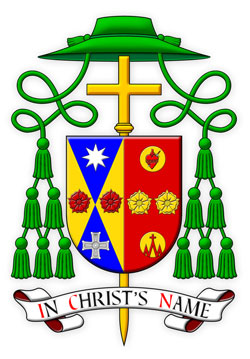 The right side of Bishop Tomlinson’s episcopal coat of arms display:

The motto “In Christ’s name” recalls the invocation preceding the priest’s entry onto the sanctuary at the beginning of the Mass and encapsulates the dedication of all efforts for the sake of the Gospel.

The arms were designed by Richard d’Apice and Fr Guy Selvester and illustrated by Sandy Turnbull.